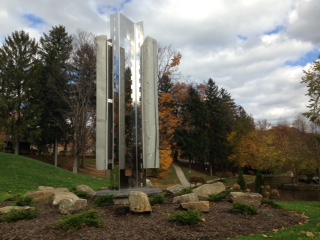 Dedicated on September 11, 2014 this memorial was a "Journey from the Rubble of the Twin Towers" from Hanger 17 in New York's Kennedy Airport to its installation and its final resting place in Silver Park. The project was a culmination of many community members that started in 2007. John Gross and former Mayor Toni Middleton went to New York City to pick up the two pieces of aluminum "skin" used to create the memorial.

The 1,120 pound, 20 foot memorial design was done by students in the art department at the University of Mount Union. The memorial is a reminder of the images of jagged shards of aluminum rising up from the rubble at the World Trade Center.

The symbolic memorial is a completely unique design and the only one in the country made with aluminum debris. The Two pieces of debris stand in the exact same orientation in relation to one another as the towers did, one to the north and one to the south. In addition, fabricated steel was designed with perforations to depict the floors in the towers, and the landscaping includes large rocks to represent the mounds of rubble amassed upon the ground after the dreadful, deadly destruction took place.

The memorial is for all who perished on September 1, 2001, at the World Trade Center, in the Pentagon, and in Shanksville, PA.